In empty spaces, in-between places and in the margins you may find the discarded bits of people’s lives. Clothing tossed beside (of course not in!) donation bins, absorbing all manner of weather and small creatures is a common site. TVs and stereo components once valued as state-of-the-art are another common find in back alleys or beside dumpsters. As I wander my neighbourhood streets and back alleys, I always wonder what compels people to discard what they once valued. These random acts of disposable do not actually seem that random. No, I think they are actually well-planned with solid motive (to discard) and intent (to rid oneself of extraneous stuff). I imagine a hatchback or SUV cruising back alleys in the dead of night looking for a suitable dumpster for a discreet disposal. The other day I happened upon a suitcase, apparently busted open from the impact of being tossed, maybe, from a moving car, lying next to a Big Brother’s of Vancouver donation bin. 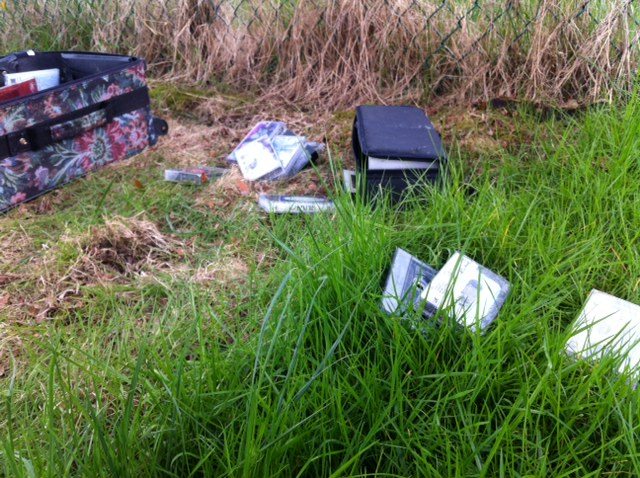 It’s contents were spilled all over the grass. CDs and tapes of all sorts. Music, embodied and delivered within a physical object (record – tape – CD), once adored by the happy listener has been replaced by digital sound. Of course this is not new. This sound delivery revolution started in the late ’90’s. But, more and more I see the evidence of that revolution in the media discarded by donation bins and dumpsters.

As I’m musing on this point, I am reminded of Patti Smith’s poem and song, 25th Floor on her Easter album (1978). As a 19-year-old listening to this song, I was always struck by the spoken word section in the song and her repetition of the line “the transformation of waste.” Maybe she’s onto something here. Some art must disintegrate and reassemble to make way for new creation. I don’t know how effective it is to toss CDs and tapes beside a donation bin. Is this an effective attempt to transform waste or to spur creation through anarchy that Smith is preaching? I’m seeing some flawed logic in my thinking here…I think I’m trying too hard to attach meaning to thoughtless (though premeditated) acts is disposal.

all must not be art. some art we must disintegrate.
positive (anarchy must exist.)
Patti Smith, 25th Floor