I’ve written a couple of posts over the past few months about zombies and political apathy. Separate posts, with unconnected themes. Now I’m seeing a connection between these 2 themes. Chris Hedges writes about inverted totalitarianism as a political force or movement that injects political apathy into North American society. We’re lulled to sleep by consumerism, distracted by new and shiny objects. We’re so overwhelmed and over-stimulated by our consumer choices that we have buried our democratic choices in a deep place that’s difficult to access. Are we sleepwalkers afraid to wake up and face the dawn of the death of democracy? Are we zombies driven to consume mindlessly? Are you still with me? 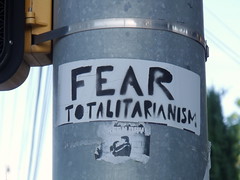 Hedges warns that North American culture is one fixated on illusion. Inverted totalitarianism is the emerging system of government in the US and Canada. It’s based on corporate power, and the corporation’s ability to corrupt and subvert democracy. Essentially money and profit are the core ideological drivers – everything is commodified and culture, religion, and government are all driven by the all mighty buck.

Inverted totalitarianism, unlike classical totalitarianism, does not revolve around a demagogue or charismatic leader. It finds expression in the anonymity of the Corporate State. It purports to cherish democracy, patriotism, and the Constitution while manipulating internal levers.(Chris Hedges, Empire of Illusion: The End of Literacy and the Triumph of Spectacle)

CBC’s Ideas has an excellent podcast on inverted totalitarianism featuring Chris Hedges. Hedges focuses on the idea North American culture is dying because it (we) is transfixed by illusion through consumerism. It’s worth a listen if you’re at all interested in this topic. Hedges’ argument is compelling and simple to grasp. Chilling is his warning that we are blind to the societal collapse that is already upon us. We have become the zombie, the sonambulist.

Representative institutions no longer represent voters. Instead, they have been short-circuited, steadily corrupted by an institutionalized system of bribery that renders them responsive to powerful interest groups whose constituencies are the major corporations and wealthiest Americans. The courts, in turn, when they are not increasingly handmaidens of corporate power, are consistently deferential to the claims of national security. Elections have become heavily subsidized non-events that typically attract at best merely half of an electorate whose information about foreign and domestic politics is filtered through corporate-dominated media. Citizens are manipulated into a nervous state by the media’s reports of rampant crime and terrorist networks, by thinly veiled threats of the Attorney General and by their own fears about unemployment. What is crucially important here is not only the expansion of governmental power but the inevitable discrediting of constitutional limitations and institutional processes that discourages the citizenry and leaves them politically apathetic. (Wolin, Inverted Totalitarianism)

Finally, Mark Taliano brings the zombie apocalypse home to Canada in his article Democracy is Dead in Canada. He warns that…

Our inattention to the federal government’s control of information and its assaults on Charter rights, is inexorably leading us towards totalitarianism, and the cost of this inattention is very high.

He provides a laundry list of assaults on Canadian democracy by the Harper Conservatives that should shake us from our undead stupor – omnibus bills, fair elections disintegration, the muzzling of scientists and the disregard of research, the dismantling of environmental protection and on and on. Wake up, Wake up! What will shake us up? I have attended rallies and demonstrations with a few hundred to a few thousand people in attendance but have to admit to a growing zombie cynicism in my heart. It takes the form of a lack of faith or disbelief that these actions will have any effect on the slow death march our government is on. I have to believe though. I must resist falling asleep and getting lost in the land of illusion.