2021 has been a long year, hey? I don’t know about you, but I’m exhausted by the uncertainty of everything. Despite all of that, the year did bless me with some amazing experiences, new friends & inspirations.

📺 The hybrid Side Door show I did at The Victoria House was one of my faves of all time. It was my first live in-person ticketed show in 18-months. @theradcyclist is a host supreme & designed a super safe, intimate & interactive garden show.

💞 Establishing lasting connections with musicians worldwide on social media. I can honestly say that I now have many friends that I’ve never met; we’ve shared knowledge, offered one another support & advice & cheered one another on. Thank you all for being so amazing!

📻My interview with Unsigned BC for their LGBTQ+ episode was one of the best interviews and shows I’ve been part of. I have great respect for the folks at Unsigned BC & how committed they are to supporting the BC indie scene & creating a safe & supportive space for all.

💓It warmed my heart to have multiple singles charting on the fan-voted The Q Reviews Q32 Music Chart. 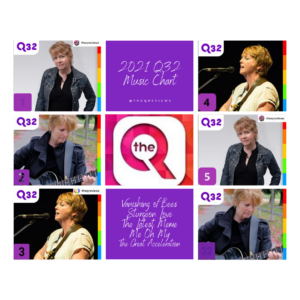 🏳️‍🌈 I loved listening to QueerFM Vancouver’s weekly queering of the airwaves.

🎸My single ‘Compassion Machine’ being featured in ‘Guitar Girl’ magazine.

🎼 Despite being geographically separated from my bandmates we managed to collaborate on my new singles and a broadcast for Vancouver’s Rock ‘n Roll Pride.