I’m thrilled with the support for my last single – a synth wave remix of ‘Vanishing of Bees’ by Atlas to Earth. It’s generated lots of airplay and press over the last couple of weeks. Thanks a million to Eric Alper, the bloggers, reviewers, music journalists, publications and playlisters who have been giving the song some love. Your support means the world! 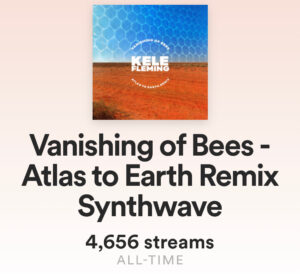 The song is close to hitting that magical 5,000 streams milestone on Spotify. This will be the fastest 5K streams for any single I’ve released so far. And, I bow with gratitude to those who have been listening and spreading the word. So exciting!

Have you seen the music video yet? I created it last fall and used a combo of footage I shot and some found footage –https://youtu.be/_NqAh0MjzAU

Here are some of the recent press articles and reviews –

And, here’s a selection of Apple Music playlists –